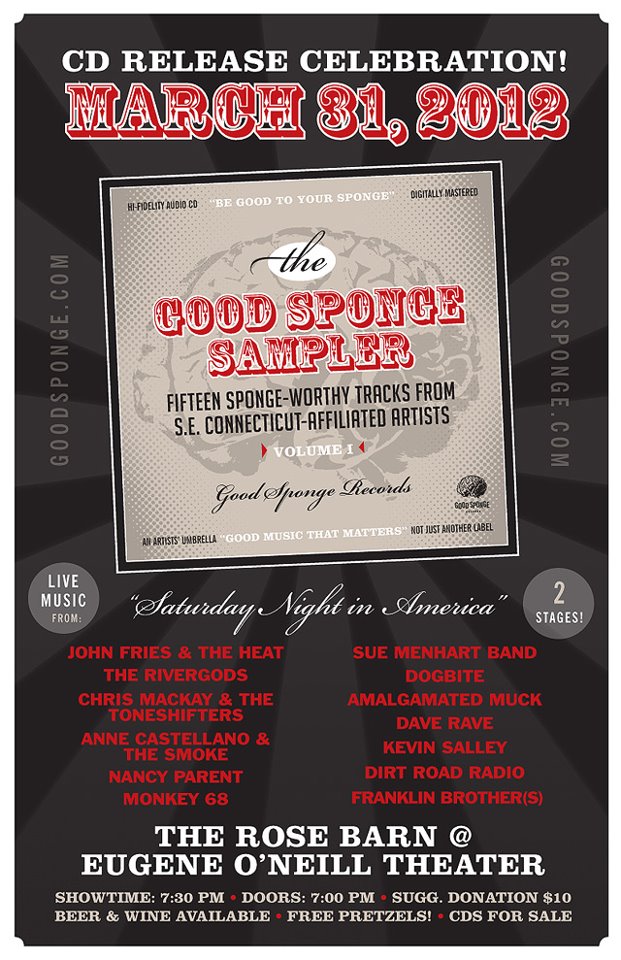 It’s “Saturday Night in America”!  Announcing the Good Sponge Sampler Vol. 1 CD Release Celebration, Saturday, March 31 at the Rose Barn @ Eugene O’Neill Theater (305 Great Neck Road, Waterford, CT, (860) 443-5378). Featuring live performances from over a dozen acts featured on the Good Sponge Sampler, performing on TWO alternating stages. Doors open at 6:45pm, with a 7:30 start time. There is a suggested $10 donation for admission. Seating is cabaret style, first come, first serve, with beer, wine and other refreshments are available for purchase (and free pretzels!) The Good Sponge Sampler Vol. 1 and other artist merchandise will also be available for purchase. Come one, come all… a NOT-to-miss regional musical event!

The performer line-up is as follows:

For more information on the Good Sponge Sampler Vol. 1, and to hear songs from the comp, please visit http://www.goodsponge.com/.

More info on each artist:

The Rivergods are an original roots-rock, Americana-tinged outfit born in 1997, who enjoy critical acclaim and a loyal fan base around southern New England. From harmony-rich folk to dirge country to swamp blues to jangly pop, the Rivergods draw influence far and wide from a vast American musical landscape.

Vincent Tuckwood is a story-teller working in fiction, song and verse. He performs and records under the moniker Monkey68.

Dogbite is an eclectic roots music combo that has been performing in Connecticut clubs and coffeehouses for the past eight years, drawing inspiration from a rich variety of sources like Ray Charles, Townes Van Zandt, and Webb Wilder. Vocal harmonies, and strong songwriting round out the picture.

Anne Castellano has been writing and performing music around southeastern CT since 2007, anchored by her haunting, melodic alto voice. This will be the debut performance of her new electric combo, The Smoke.

When the musical forces behind Chester’s popular Small Town Concert Series consolidated into one talent-crammed quintet of sundry songwriter musicians who share a love for “heirloom music,” including folk, rock, and country — an amalgamation of musical forces called Amalgamated Muck was born. Look for their debut release, The New Leisure Class, in April 2012 on Good Sponge Records.

Mixing country swing, swamp and rockabilly with the occasional obscure blues cover, Chris Mackay & the Toneshifters keep the hips moving and the crowd smiling. Chris Mackay’s vocal stylings, along with his percussion and washboard skills, add sizzle to this hip, talented quintet. Look for their new CD Picture on the Fridge in the next few months.

Nancy Brossard Parent is a singer-songwriter from Waterford, Connecticut. Since 1998, Nancy has performed with the folk-rock band, The Rivergods, as a lead singer, guitarist, and pedal steel player. Her debut album, Vision of Angels,  produced by Hugh Birdsall (Dogbite, the Reducers) will be out in the fall of 2012 on Good Sponge Records.

Kevin Salley is a wildly popular local music teacher by day (at New London’s Regional Multicultural Magnet School), and a rocker by night. He is also the drummer for the band Dogbite. His forthcoming release in late 2012 is titled Now.

With a musical career including New York City-based bands Nervus Rex and the Grammy-nominated Washington Squares, songwriter and musician Lauren Agnelli left the big city behind and moved to Connecticut, where she co-founded Small Town Concert Series and the band Amalgamated Muck. From rockers to ballads to jazz songs and music that defies strict categorization, Dave Rave has been called ‘the Canadian Nick Lowe’ for his melodic songwriting styles. Since the late ’70s, when he fronted the influential Canadian punk band Teenage Head, Rave has split his time between Hamilton, Ontario, Liverpool, England, New York, NY, and Chester, CT, frequently co-writing with Lauren Agnelli.

Formed in the Spring of 2010, John Fries & The Heat have quickly become one of the region’s most durable live acts, playing countless gigs from New York City to Boston. Fronting the band is journeyman John Fries, whose raspy voice and guitar histrionics seamlessly blend his personal compositions and deeply-rooted blues traditions.

The Franklin Brothers are Carl and Jay Franklin, musical and studio stalwarts who record and perform at their studio, PWOP Studios, in New London, CT. Their debut CD, Lifeboat to Nowhere, was released in 2011 to rave reviews. Carl Franklin will have a new solo out in May of 2012.

Named to Indie-Music.com’s Top 25 in 2010 and 2012, The Sue Menhart Band is fierce live soul/R&B/blues/rock band fronted by the inimitable gypsy blues vocals of Sue Menhart.  The band is currently working on their full-length follow-up to 2011’s Forever EP, released on Good Sponge Records.